Mapping, cartography or mapmaking is an essential part of the human history. From cave paintings to ancient mapping, creating a drawing of our surrounding is a tool to define, explain and navigate an environment. 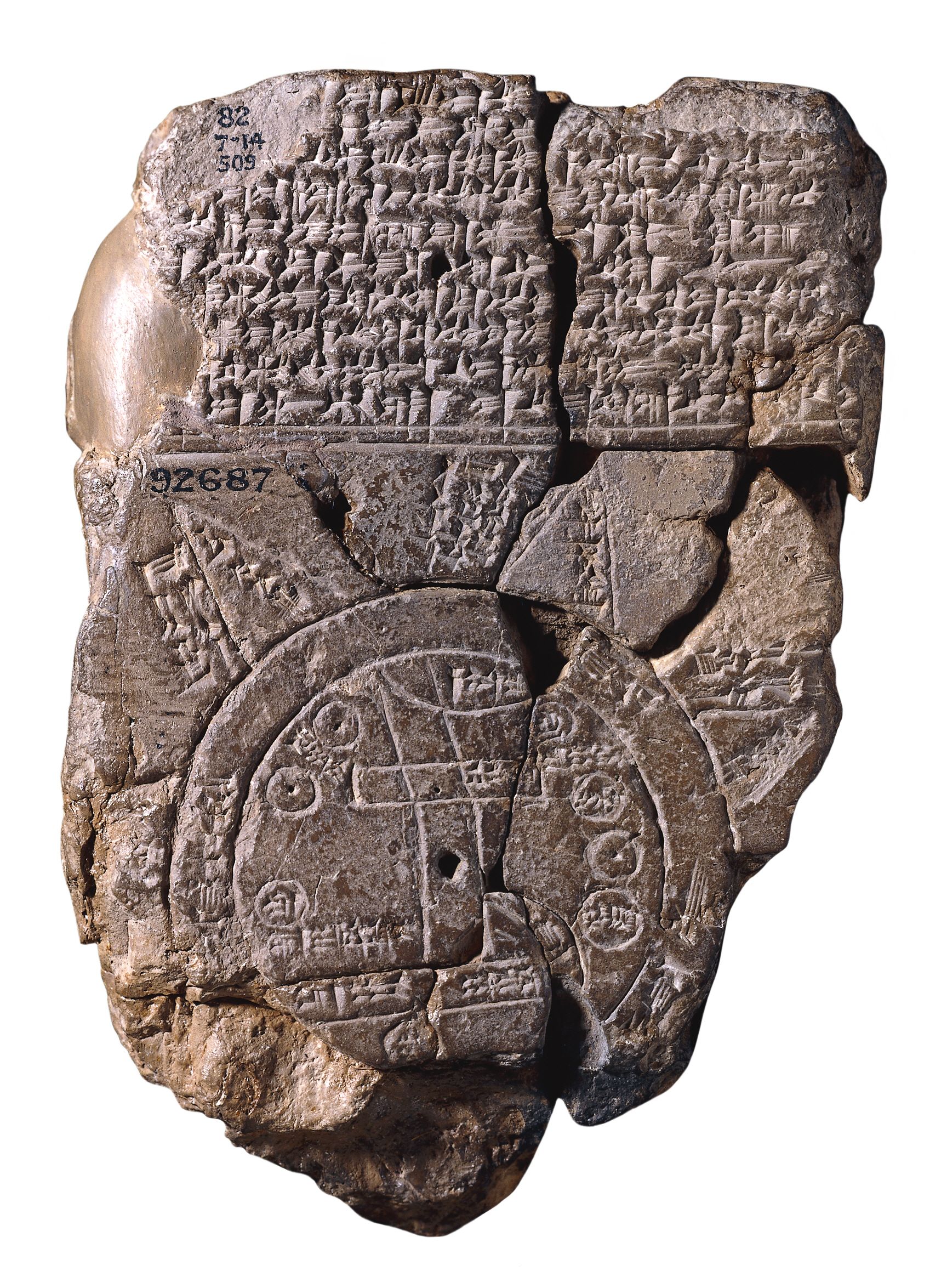 A unique ancient map of the Mesopotamian world. Babylonian, about 700-500 BC. Image courtesy of The British Museum.

Early map creating represents a significant step forward in the intellectual development of knowledge for the human race. The information and maps were used as tools and could be passed on from one generation to another. Early maps are not geographical correct, but maps to capture the observers spatial knowledge of a space as a cognitive map. These maps contained the characteristics of that particular space and that could be remembered by humans, such as paths, landmarks, nodes, mountains, sea and areas.

One of the oldest maps of the Mesopotamian World dates back to around 500-700 BC. This is a unique ancient carved tablet that contains a cuneiform inscription (early written expression) and Babylon is drawn in the middle. Also, other places are mentioned such as Assyria and Elam. Around the centre is a circular waterway described as 'Salt-Sea' and the outer rim of the sea is surrounded with about eight regions. The regions contained marked signs or are labeled with names as 'Region' or 'Island', interestingly the distances are marked between the regions.

Over time maps became increasingly accurate and a universal tool for communication. Regardless of language or culture maps are mostly easy to understand by most people. By the use of scientific tools such as a compass rose, maps would improve as navigation tool. The compass rose was invented around the same time as the Polynesian explorers went on their Voyages. But made it appearances not earlier that the 11th century on maps and charts for a sense of orientation and direction.

The knowledge of aiming

The Babylonian Map shows a clear image of where destinations are located. Although the reading of the tablet is illegible, we can clearly make out the direction of destinations. If you would follow the euphrates towards the mountains other destinations will become able to locate. Similar to the Pythagorean Theorem, if you know two elements you can hypotenuse the third element. In this case identifying two locations makes the observer able to set a path to the desired location.

The usage of landmarks to navigate originates from the tablet and is still used today for orientation and navigational purposes. As we browse through history landmark maps are commonly used to indicate destinations and have a reference of landmark buildings.

Example of the Roman Empire a landmark map, an abstract map of Europe showing cities, Middle Sea, Middle East and parts of Middle Europe. The landmarks are placed on top of the map as a 3D landmark. This map dates from the high days of the Roman Empire. Image taken from Erroma.

The Image of the City (Kevin A. Lynch)

Kevin Lynch published the book The Image of the City (1960) and described a way for people to mentally map and understand their environments in a logical and predictable way. In his book he describes a the concept of mental maps, a sketch map by a average person about an environment from memory. Within the mental maps he discovered five common elements to indicate whereabouts, destinations and paths. Similar to the early maps.

People who move through the city engage in way-finding. They need to be able to recognize and organize urban elements into a coherent pattern. ~Kevin Lynch

A mental map is one of the most important human elements to 'read' an (un)familiar environments. In order to orientate and navigate we tend to use references from our surroundings and interpret elements to choose the desired path.

A mental map is the human imagination of reality, a map that is different for everyone. According to the mental map we can estimate where other places are places and how we can go. This is our association with the environment, perception and appreciation of this environment.